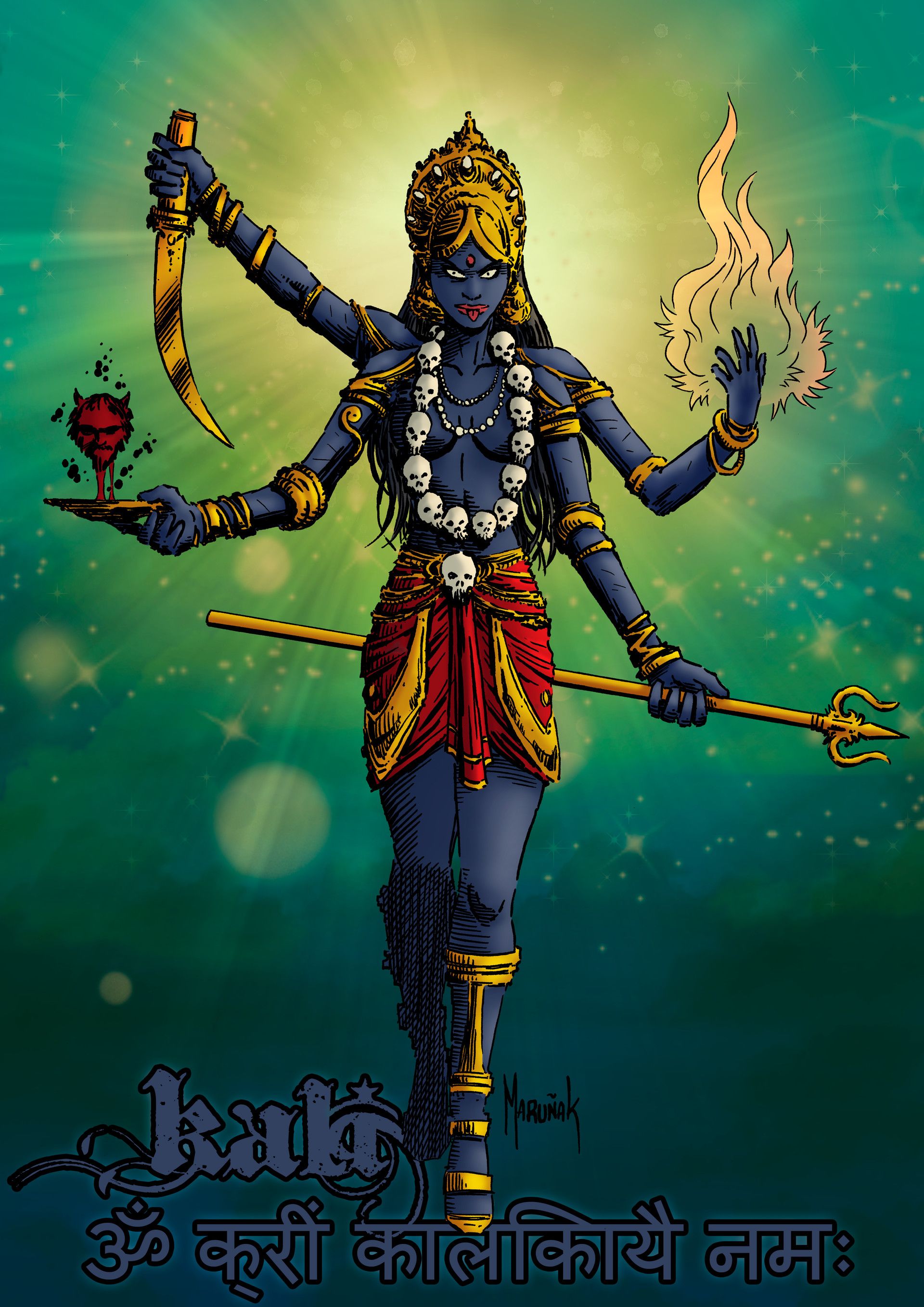 The Netflix movie Bulbul has been making a strong statement with its stance on gender abuse. The protagonist Bulbul subverts the power structure by avenging the wrongs done to her and the other women in the film, similar to Goddess Kali. Today, let’s discuss the unorthodox godliness of Kali, a deity who is pretty much the epitome of Indian feminine power.

If we are to correlate Kali with the ideals of feminism, she represents the unrestrained female expression. She neither fits the image nor does she perform the functions we identify with the traditional Hindu Goddess. A traditional Hindu Goddess otherwise known as a “Devi”, is supposed to devote herself to filial duties and only engage in battle with the permission of her husband. The revered Goddesses Parvati and Lakshmi are examples of such Devis. Kali, on the other hand, in her all destructive power, is a character bordering on controversy. She is the embodiment of Shakti, the female power and emerges as an independent Goddess around 1000 BC. To understand Kali however, we must first analyse how her image has developed through the ages.

Kali initially came about as an expression of nature, possessing the power of creation along with uncontrollable destructive force. According to Hindu mythology, there are several traditions of how Kali came into existence. One tradition narrates how the Warrior Goddess Durga, who fought with Mahishasura, became so enraged that her anger burst forth from her forehead in the form of Kali. When the black Goddess Kali was born, she went wild and ate all the demons she came across, and their skeletal remains hung from her neck in the form of a chain made up of skulls. Another version of Kali's birth suggests that the deity Parvati shed her dark skin which emerged as Kali. This gave birth to the dual names, Kali became Kaushika, the sheath, and Parvati, in her original form was left as Gauri, the fair one. The third version relates that the Gods asked Parvati to deal with the demon Daruka and she responded by jumping down Shiva's throat. She immediately combined with the poison held in Shiva's throat and was transformed into Kali, who eventually went on to destroy Daruka.

Kali's presence in ancient Hindu literature is found in the text of Devi-Mahatmyam, where she is described as a manifestation of Shakti's force in the Universe. The Devi Mahatmyam, located in the Markandeya Purana, was what gave Kali a position in the Hindu Pantheon. This text, also known as “Chandi”, emphasizes Kali as the ‘forceful' form of the Goddess Durga and a demon slayer who plays an important role in the many battles between the divine and the evil forces. Kali's initial appearance in this text is through the narration of her conquest of the demon Raktabija. Kali swallowed Raktabija mid-air and lapped up his drops of falling blood. This was done to prevent his re-appearance because every blood of Raktabija that would touch the ground would produce a replica of the demon.

In Hinduism, Kali is the feminine form of the Sanskrit word “kala”, containing a dual meaning for both time and black. Her name means “she who is time” and has been evolved to represent “she who is death”. She has strong traits that render her a Goddess belonging to the group called Mahavidyas, composed of Tantric deities who symbolize complete independence. Kali is a great exemplar of virtues like freedom, spirituality and unrestrained feeling. She was also symbolized as a harbinger of revolution as was thus used as an icon for the poor who were looking forward to change within the societal structure. Kali was largely worshipped in Bengal and her devotees were found making blood sacrifices in temples and she soon became the Goddess for thieves and outcasts of the Hindu cult society. However, her untamed appearance in Hinduism changed with her association to Shiva. The stories of Shiva challenging Kali to a wild Tandava dance became stories of Shiva trying to “tame” her. Kali, initially depicted as the fiercest form of Durga, was only accepted into refined Hindu society as the consort of Shiva.

We are acquainted with the depiction of Kali after her victory over the Asuras, so immersed in her dancing that she accidentally steps on Lord Shiva, her husband. The popular tale narrates that Kali, the multi-limbed warrior Goddess in a frenzy caused the demon army to scatter. Kali is so absorbed in her rampage that her consort Shiva throws himself at her feet to stop her from causing further destruction. Kali, on finding her husband below her feet, stuck out her tongue in surprise. Originally, Kali’s tongue lolling from her mouth was used to symbolize blood-thirstiness. However, the portrayal of Kali stomping on Shiva, the most powerful celestial being, was so upsetting to the Indian patriarchy that it was kept secret. Her tongue, a symbol of power was converted into a symbol of embarrassment upon finding out that she had stepped on her husband.

Kali was initially described as spiritual and bodily and this depiction was celebrated to such a degree that a Tantrik cult emerged that devoted itself to her eroticism. Kali herself, was depicted as a deity indifferent to the human gaze and unbothered by her wilderness. However, Kali's immodest nature was frowned upon and several states attempted to manipulate her image according to their own culture. Bengali poets during the seventeenth century attempted to make her appearance more domestic by adding ornaments to her hands, which already held weapons. Furthermore, her skin colour was changed to a blue from deep black and this new image was popularized by idol makers in Bengal.

The growing popularity around the destructive image of Kali, mostly because of its appeal to the people belonging to the lower strata of the society, was threatening to imbalance the power structure in the society. The unorthodox Kali was readjusted to fit the needs of the society and hence, Kali the symbol of feminine power was stereotyped to represent unrestricted and destructive feminine expression. With Colonialism, the West vilified Hindu culture as uncivilized and mystic. Kali till then who was celebrated as an epitome of wilderness, was considered too pagan and unfit for Indian women to follow. Her stories were reinterpreted to fit the feminine Hindu “ideal” and Indian masses were deliberately mislead so that the power structure remained unchanged, femininity was still passive and authority stayed with the patriarchy.

Even today, Kali is being used for legitimizing the belief that if a woman is not controlled, she is bound to go berserk. However, the feminist narrative has analysed the stereotypes surrounding her image and concluded that there exists a duality in her existence. Arundhati Singhal, the co-founder of the Mythology Project explained that the many contrasting traits of Kali is due to her emergence as an early female deity. During ancient times, multiple natures was considered characteristic of feminine divinity and this trope remains even today. This is opposite to what is expected of male Gods who have a single side.

This dual or multiple nature of feminine divinity allowed the deities to stand for multiple ideals. Hence, a warrior Goddess could both represent both destruction and motherhood or nurturing. This theory is also applicable for Goddess Kali when we analyse the connotations of the expression “Ma Kali”. The attachment of an expression of motherhood to Kali indicates her contradictory nature. Kali is a wife and a mother but she is rarely identified with either of the terms. She is in fact, criticized for being an immodest wife and a self-absorbed mother, as recited by the seventeenth century Bengali poets. She deviates from the societal norms and accepted standards of motherhood because her motherliness lies in her protectiveness over domesticity. However, her motherly nature comes forth when we analyse how Tantric cults worship her as the Mother of the entire Universe and the Ultimate Protectress.

The truth remains that the modern age has rarely recognized the duality in Kali's image and used it to serve a greater purpose in the society. The fierce femininity of Kali has remained hidden and she has rarely been used as a symbol of feminism except recently with the Kali trope found on social media and her characterization in the Netflix movie Bulbul. To put it bluntly, Kali’s use as a symbol of feminism in social movements or in popular culture has been rather unsatisfactory. Kali has co-existed with patriarchal structure and female oppression in India since ancient times, so where is the feminist potential in her worship? How can her femininity be used to free us from the shackles of patriarchy when she herself exists within the structures of patriarchy?

This answer too, lies in her contradictory nature. A Goddess cannot stand for just one thing and even if Hinduism narrates that Kali is ultimately subdued by Shiva during the Tandava dance, she remains unapologetic of her female strength. She may have co-existed with the traditionalism associated with females in the Indian society but she is filled with pride while unleashing her feminine strength. She also remains indifferent to the male gaze that is possibly threatened by such display of power. Kali can be signified as a symbol of feminism simply because she is threatening to the patriarchy. She has been used time and again to caution women against the consequence of rage, and in South India, she is a symbol of discomfort. She is a representative of what an empowered woman can be in Hindu mythology, and she is the epitome of the “Angry Indian Goddess”. Kali may have a contradictory nature that questions her essence as a symbol of feminism, but in all honesty, she is as good as it gets when it comes to a source of female power and equality in the Hindu culture.