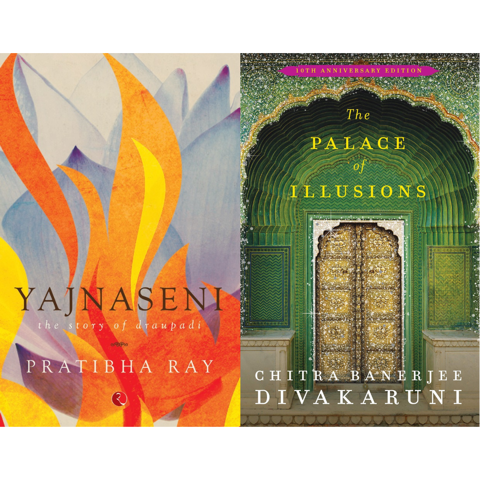 The above-mentioned Sanskrit hymn recounts the five sacred and virtuous women of the Hindu mythology. According to this hymn, these five women should be forever revered since they are the destroyers of sin. However, their metaphorical journey towards this iconic status has not always been a smooth and easy one. Each of them has experienced adversities in their own way, yet could finally transcend their suffering, and has earned immortal reverence. Draupadi is one of them, who too, like the rest, had a life of trials and tribulations. Yet, she emerges as illustrious epitome of patience, courage, and emancipation. She is one of those key characters of the great Indian epic, Mahabharata, who had a major role to play in the constituting the epic narrative. Most popularly known for being the wife of the five Pandava brothers, Draupadi however has an identity of her own. Her presence in the epic is so immensely vibrant and prominent that many a times she has outshone the brave Pandavas. She exhibited unparallel fortitude and stoicism in striking a chord to her polyandrous marital status, at the same time, her unceasing thirst for justice was one of the prime impetus that led the Pandavas to fight the War of Kurukshetra against the Kauravas.

Draupadi has been represented in multiple different ways, in diverse form of narratives across ages. She has been the protagonist of feminist literary texts, woman-centric works of fiction, she is worshipped as a part of cultural heritage in the southern part of India, her character occupies the centre stage for performative ats, she also figures in different folklore and folk performances in India. To start with the fictional work on Draupadi, the names of texts that are invariably supposed to come to mind is Yajnaseni by the Odia Jnanpith Award winner author, Pratibha Ray, and The Palace of Illusions by the Indian diasporic author, Chitra Banerjee Divakaruni. Both Ray and Divakaruni have placed Draupadi as their protagonist and the tale of Mahabharata is narrated from her perspective. The stories capture the journey of her life, the choices she was forced to make, the choices she was compelled to deny, the abysmal humiliation that she had to suffer, and most importantly, her relationship with Karna, and Krishna. Both the female authors deliberately chose to subvert the standard understanding of the Mahabharata by narrating the epic story from a woman’s lens. Although written almost 25 years apart, by two different culturally oriented female authors, the agenda of both the texts remain nearly similar. Both the texts aim at transgressing the unipolar, male dominated space of Mahabharata, and bring to the fore, Draupadi’s story. Both the novels excel in demonstrating the relentless struggle of a woman in the man’s world.

Worshipping Draupadi is an age-old cultural practise in many places across Tamil Nadu. It is believed among many communities that she is the destroyer of evil, and it was because of her vengeance that the Kauravas were destroyed. In this cult, she is worshipped as Goddess Kali, who is the manifestation of the protector of the weak against the atrocity of the evil. An annual festival at the Draupadi Amman Kovil (temple) is celebrated in the Tamil month of Aani. The temple is situated on the banks of the river Thenn Pennai, which is a few meters away from Cuddalore city. Therukoothu, a form of traditional Tamil street theatrical performance renders to this festival a speciality. Different stories from Mahabharata that revolve around Draupadi are the key elements of Therukoothu. The performances take place every day for 12 consecutive days, at the temple premises, and each day a different episode from Draupadi’s life is enacted. The worship of Draupadi Amman is also very popular in Kondal, a village in Nagapattinam district. Here Draupadi is worshipped as the village deity. Thimithi, a local festival celebrated here, also draws its inspiration from the Mahabharata. It is believed that in Mahabharat, Draupadi had to walk on ember to prove her innocence after the war was over. Commemorating this mythical narrative, the natives of Kondal perform fire-walk which is known as Thimithi. Not only in Cuddalore and Kondal, Draupadi is extensively worshipped in different parts of Tamil Nadu and Karnataka. This tradition exits in some places of Sri Lanka as well. The cultural practise of Draupadi worship has its variations, yet, a key element predominantly exists in almost all the cults. It is the element of demonstrating Draupadi as a symbol of strength and power. Often, the issues like her marriage, or her disrobing and humiliation at the hands of the Kauravas are subsided in these cultural narratives. Instead, she prominently emerges as a protective, mother figure who even protected her five husbands from their opponents. The culture of Draupadi worship is a celebration of the female power and matriarchy through which Draupadi’s human existence is transcended and she is rendered divinity.

Draupadi, the enigmatic, charismatic, fierce character of Mahabharata has fascinated writers, artists, and creative minds of all sorts across ages. Her suffering has melted hearts, yet, she has reigned hearts as a brave woman who could transgress her apparent pitiable condition. Draupadi is the epitome of female power, a vibrant manifestation of dignity, intelligence, and courage, and an awe-inspiring character who unceasingly offers inspiration to Indian women to live a life of dignity and courage.